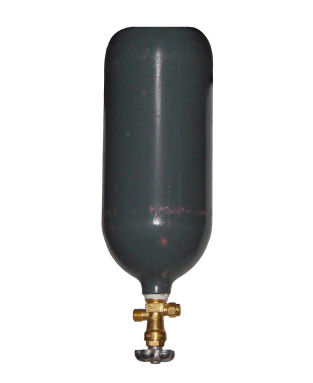 Years ago, an industry “expert” told me about a different type of compressed gas cylinder problem, and to this day I’ve never determined if it’s a real issue or not.  It involves cylinders containing liquefied gases shipped under their own vapor pressure.  In common parlance, we’re talking about cylinders of CO2 (carbon dioxide), or nitrous oxide or propane.  All three have liquid in them- the amount will vary with the size of the cylinder and the specific gas- and a vapor head.  Roughly 2/3 liquid and the rest head space.

Most cylinders have safety relief valves as part of their design, and in the case of the upside down cylinder above that safety relief housing covers a frangible disc which will rupture at an appropriately designated pressure to keep the cylinder from exploding if over-pressurized.  The safety relief device housing has a number of ports through which the gas exits in the event that the frangible disc ruptures, and in this manner the gas is safely discharged before the cylinder can be compromised.

However, what I was told was that if a cylinder with a liquefied gas was inverted the relief device wouldn’t work efficiently, since the frangible disc would have liquid against it.  The idea was that the liquid would form a meniscus  over the disc and prevent it from functioning.

The reason some people invert a cylinder is to draw liquid from the valve- they’ve probably never heard about a dip tube (which can provide liquid to the user without inverting the cylinder).

To this day, I don’t know if the thinking about liquid forming a meniscus around the frangible disc which prevents it working is true or not.

But I do know it’s stupid to test the theory.

If you need liquid from a CO2 cylinder, get one with a dip tube.  Your local gas vendor will know what they are.