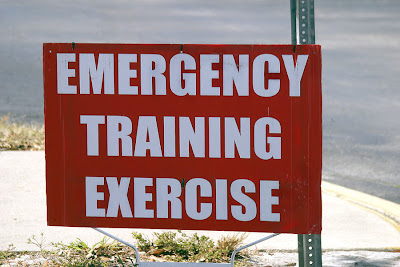 I was talking to a salesman a while back who just got drafted to participate in Emergecy Response training. Good guy. Smart. Never been in a HAZMAT suit before and wanted to know if he’d need to wear a tie with it. Thought SCBA was a government agencies. Claustrophobic so he couldn’t go into a confined space without having a panic attack.
So I kind of wrote him off.

Funny thing is, after the last several months, I’ve seen a difference in him. He’s sold emergency response equipment for years, but he never really understood it. Now that he has to wear it and use it during his training, he’s actually starting to know what it’s for.

He comes and asks me questions, real questions for a change.

Every now and then it hits me how greatful I should be for all the training I’ve received. It’s both saved and changed my life. Sometimes I forget that I didn’t used to know anything about toxic gas. Now I occasionally take that knowledge for granted.

That’s a mistake.
We’re never to old to train. Never.

What do you think?

She's In Danger & So Are You

Stress and Training the HazSim Way- Part Four of Five